Overall prizes were awarded in the tournament – 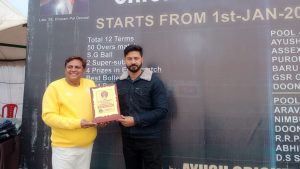 Vikram Deshwal, founder of Ayush Cricket Academy, said, next year also the same tournament will be held, last time 8 teams participated in our place, this time 12 teams took part while the team became 18, due to the league, the tournament had to be shortened. That’s why 12 team Rakhi this time. I assure you that next time there will be a better tournament. My aim is to bring quality players. Here work could have been done from one ground, we have made two grounds so that the players get good facilities, the atmosphere seems to be of cricket. In two years, we have played 20 tournaments out of which we have won 16 tournaments. In 4, we have reached the semi-finals. So it shows our preparation somewhere. There are one to one academy in Dehradun but this is the difference between us and them, we look at quality and provide facilities. Players get quality matches here. Come out a good player tomorrow, learn well. Takes special care of the ground, we take care of it like a child, the ground has a special role to play in this game. Unless the children play the tournament, they will not have the experience. This is the level ground of Rajiv Gandhi and Abhimunya ground. Our ground is approved by BCCI. I will appeal to CM Dhami to take steps for the children, to build a playground. The women players of our state have given excellent performance. In such a situation, the present Sangh is also doing a good job, Mahim Verma ji is doing a good job. There is hope and it would be good if the government also becomes a part of it. Sports will get a boost”.

Vijay Pratap Malla Secretary DCA and Guest of Honor Anil Doval Joint Secretary DCA both praised the AYUSH Cricket Academy and said that there was a very good atmosphere for cricket here. Ayush Cricket Academy has achieved a very good position in two years. Whereas both agreed and there should be sports grounds in the state. We don’t have that much ground facility right now. We do not have any dearth of talent but it is necessary to provide them the right platform and playground. Also, how to bring the talent that is in the mountain, those people will focus in the coming time. Most of the places there are no academies. A good player will be found but how to give him a platform is a big challenge.