The great Lionel Messi’s dream of becoming the world champion has finally come true. Messi’s men, who missed out on the title in 2014, beat France 4-2 on penalties after a 3-3 draw at full time in one of the most thrilling finals in FIFA World Cup history. This is Argentina’s third title. Earlier, he had won the trophy in 1978 and 1986. Argentina’s goalkeeper Martinez did wonders in the penalty shootout. He saved chances and made Messi’s dream come true. Along with this, Messi’s name has been written in golden letters along with Maradona’s.

Argentina led by Lionel Messi led 2-0 at halftime in the World Cup final against France. Messi scored in the 23rd minute from a penalty kick awarded to him after France’s Dembele fouled Angel Di Maria. Angel Di Maria scored the second goal after 13 minutes. Messi now has 12 World Cup goals, the same as Pele. He became the first player to score in every match of the group stage and knockout stage in the same World Cup. This is Messi’s record 26th World Cup match and he broke the record of Germany’s Lothar Matthaus. He has scored 11 goals in five World Cups since 2006.

In the second half, the game seemed to be going in Argentina’s favor when Kylian Mbappe scored two goals in two minutes to turn the tide. Mbappe scored a penalty in the 80th minute, while 97 seconds later, entangling the ball in the net, brought France to a 2-2 draw. In front of fellow Mbappe’s pace in Paris Saint-Germain, Messi’s heroic defenders completely failed. Argentina’s goalkeeper Martinez also looked helpless. In this way Mbappe is now one goal ahead of Messi.

After this, both the teams could not score goals. Argentina had two chances, but the French defense did not allow them to score. The match was extended for extra time. In the 108th minute, Messi scored a goal to give the team a 3–2 lead, and scored a penalty in the 118th minute to equalize the score at 3–3. Later in the penalty shootout, Messi’s team created history by hitting the ground. 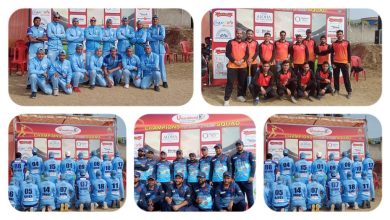